In the spring of 2021, the MPO board voted to create an Ad Hoc Committee to explore the ongoing issue of cost increases for programmed TIP projects. The goal of the committee was to explore the causes and consequences of cost increases for projects that the MPO funds and recommend possible policy changes to the full MPO board. The committee was chaired by the MPO board’s vice-chair, representing the Metropolitan Area Planning Council, and had eight members representing MassDOT, the Regional Transportation Advisory Council, the MBTA Advisory Board, the City of Boston, the Town of Everett, the City of Somerville, the Town of Medway, and the Town of Rockland.

The committee met six times, ultimately voting to recommend a set of policies to the full MPO board. This fact sheet (PDF) fact sheet (HTML) outlines proposed policy changes to the TIP process. This proposal is available in a more detailed format in a memo (PDF) memo (HTML) submitted to the MPO board for consideration at the board’s meeting on Thursday, September 23, 2021. At that meeting, the board voted to release this proposal for public review. The public comment period closed at 5:00 PM on Monday, October 18, 2021. The committee met on October 21, 2021, to review public comments. The MPO voted to endorse the new policies at its meeting on November 4, 2021. The MPO applied the new policies for the first time during the development of the FFYs 2023-27 TIP, which was endorsed by the MPO on May 26, 2022.

The current TIP (PDF) current TIP (HTML) includes a list of transportation construction projects that the MPO will fund over the next five years, including under the Community Connections Program, which focuses on solutions to first- and last-mile transportation gaps. For the complete list of Regional Target- and state-prioritized projects, refer to the TIP tables. The FFYs 2022–26 TIP is in effect from October 1, 2021, to September 30, 2022. To review a summary of the development of the FFYs 2022–26 TIP, visit the archived TIP development page. 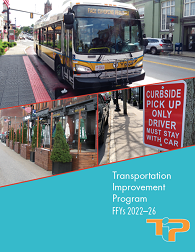 Tables of Projects by FFY [updated to include Amendments] (PDF)

Amendment One proposed changes to both highway and transit projects in the current TIP. Amendment One funds two new highway projects and supports operating expenses for the Metropolitan Highway System under the Coronavirus Response and Relief Supplemental Appropriations Act. Amendment One also adjusted the MBTA’s federally funded project list to reflect current project readiness and funding levels. The amendment carried some unspent FFY 2021 funds into FFY 2022, including the addition of several transit projects funded directly by the MPO and the recent Rebuilding American Infrastructure with Sustainability and Equity Grant awarded to the Blue Hill Avenue Multimodal Corridor Project. For more information, refer to the Amendment One (PDF) table. Amendment One was endorsed by the MPO on January 20, 2022.

Amendment Two proposed the removal of one highway project currently funded in FFY 2022. Project #612028 includes bridge deck replacement and superstructure repairs on the Fellsway West over Interstate 93 in Stoneham. Due to the need for an expanded scope to address the maintenance needs of the bridge, the project will be redesigned and added back into the TIP at a later date. For more information, refer to the Amendment Two (PDF) table. Amendment Two was endorsed by the MPO on February 17, 2022.

Adjustment One proposed a change in funding source for project #609066: Multi-use Trail Connection, from Recreation Road to Upper Charles River Greenway Including Reconstruction of Pedestrian Bridge N-12- 078=W-29-062 in Newton and Weston. This project was funded in FFY 2022 using statewide Congestion Mitigation and Air Quality (CMAQ) funds. The adjustment reallocated earmark funds, which were not spent on another project, to replace these CMAQ funds. For more information, refer to the Adjustment One (PDF) table. Adjustment One was endorsed by the MPO on April 14, 2022.

Amendment Three proposed the removal of the MPO’s funding for the Green Line Extension project in FFY 2022, as these funds are no longer needed to complete the project. Amendment Three also proposed the addition of project #607670, Superstructure Replacement on Maffa Way and Mystic Avenue in Boston, in FFY 2022. This project was proposed for funding using the MPO’s reallocated Green Line Extension funds, new funds available to the MPO from the passage of the Bipartisan Infrastructure Law, and MassDOT funding through the statewide highway program. For more information, refer to the Amendment Three (PDF) table. Amendment Three was endorsed by the MPO on April 28, 2022.

Adjustment Two proposed changes to the funding sources for three FFY 2022 MWRTA projects to allow these projects to use unallocated FFY 2021 funds and meet matching requirements for federal funds. For more information, refer to the Adjustment Two (PDF) table. Adjustment Two was endorsed by the MPO on April 28, 2022.

Amendment Four proposed the addition of four projects to the TIP in FFY 2022, including one transit project proposed by the Cape Ann Transportation Authority using state funding and three highway projects proposed by MassDOT using new funds available from the passage of the Bipartisan Infrastructure Law. For more information, refer to the Amendment Four (PDF) table. Amendment Four was endorsed by the MPO on May 26, 2022.

Adjustment Three proposed the reallocation of FFY 2022 MWRTA state matching funds to allow these funds to be spent before the end of the state fiscal year on June 30, 2022. For more information, refer to the Adjustment Three (PDF) table. Adjustment Three was endorsed by the MPO on June 16, 2022.

Amendment Eight proposed the removal of the MPO’s funding for project #609090, Boston-Milton-Quincy Highway Lighting System Replacement on Interstate 93 from Neponset Avenue to the Braintree Split due to overlapping project schedules in the same work area. For more information, refer to the Amendment Eight (PDF) table. Amendment Eight was endorsed by the MPO on September 1, 2022.

The MPO must publish a complete list of obligated projects within 90 days after the close of the FFY. Obligated projects are projects that have funds committed to them through the approval of a construction contract. The list includes the amount of money approved in the TIP, the total amount obligated, and the remaining balance for each project or program. The FFY 2021 Federal Obligation Report (PDF) lists the MassDOT, MBTA, MWRTA, and CATA projects within the MPO area that spent federal funds during FFY 2021 (October 1, 2020–September 30, 2021). Federal obligation reports from previous FFYs may be found in the TIP Archive.

Older TIP documents and the lists of projects that were advertised for construction in prior years are available in the archive.