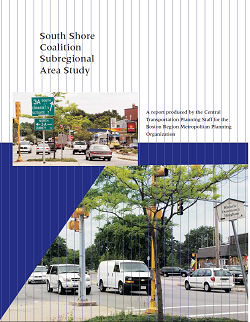 The South Shore Coalition (SSC) subregion consists of 11 communities southeast of Boston: Cohasset, Duxbury, Hanover, Hingham, Hull, Marshfield, Norwell, Pembroke, Rockland, Scituate, and Weymouth (Figure 1). The area is bounded by the Atlantic Ocean to the east, roughly circumscribed by the Kingston/Plymouth commuter rail line to the west, and bisected by Route 3, which runs through the subregion from the northwest to the southeast. In addition to Route 3, major state-numbered highways/arterials include Routes 3A, 18, 53, and 228 in the north/south direction and Routes 14, 123, and 139 in the east/west direction.

Due to existing—and anticipated increases in—congestion, and mobility and safety concerns, the SSC subregion was chosen for a subregional study. The objectives of the study were to: